During the course of the “Ododo Wa Community Dialogues” Scalar project development, the CSiW Scalar team has come across useful resources from grassroots community-based digital publishers and professional editors on the subject of digital content and access.

In this section, we share some of the resources we have come across and the lessons we have learned.

When working in community-based and community-facing contexts, ethical and security considerations are front of mind. These considerations are no less important in digital fields. Digital projects need clear parameters with infrastructure and plans for the projects’ lifespans. Cultural safety, the needs of the community and individual community members, their narrative ownership, and their control over how and if they are represented in the project, as well as their ability to withdraw consent, are all foundational to ethical practices. These foundations are integral in digital projects and scholarship.

CSiW is a long-standing partnership with global project partners. During the development of the “Ododo Wa Community Dialogues” Scalar project, the Scalar team had the benefit of drawing from these relationships for direction and leadership. For example, the Refugee Law Project offered direction on the use of photos they contributed to the project. If project partners do not offer direction, be sure to ask for some.

This project was in development during exceptionally transformative times. Social movements and uprisings are characteristic of the period. As Maryse Mitchell-Brody of the Third Wave Fund warned in June 2020, “There is *no* secure way to post photos or videos of protestors on social media ” even if the posts do not show criminalized activities. That is true for all digital and open access projects that are, or could be, of interest to police and security forces. Metadata can also be mined by police and security forces. Digital projects working with vulnerable and systemically oppressed groups must proceed with utmost caution, care, and with openness about the risks and their impacts on contributors and participants. For more on the social media context, read Mitchell-Brody’s series of posts on Instagram.

The intersections of content and access are at the forefront of community-based and community-facing projects. Post secondary education settings are not separate from broader structures and practices that generate power and resource differentials. In March 2021, the Slow Factory Foundation published a series on digital colonialism. They define digital colonialism, stating:

Sometimes called media or electric[sic] colonialism, digital colonialism is a term coined by Herbert Shiller in 1976 referring to the ways Global North countries are technologically positioned above poorer global regions. This pervades the way oppressive colonial techniques are applied online and on social media, keeping marginalized groups and communities from achieving wider or equal reach and visibility to white people, continuing their systemic erasure.

The Slow Factory Foundation draws links between digital colonialism and “memoricide,” which refers to the destruction of memory and the past of targeted peoples. A comprehensive strategy is necessary for digital projects to avoid exacerbating these harms.

Memorialization and documentation have been integral to Grace Acan’s and Evelyn Amony’s work, CSiW’s and CMHR’s collaborations with Acan and Amony developing the “Ododo Wa: Stories of Girls in War” exhibits, and the “Ododo Wa Community Dialogues” Scalar project. During the exhibit launch in Uganda, CSiW partner organization Refugee Law Project organized a community dialogue at the National Memory and Peace Documentation Centre. In his Active History post  Gilbert Nuwagira reflected on the event, writing:

There was a sharing and affirmation of histories that were familiar to some and unfamiliar to others. This was coupled with an acknowledgment that stories like these allow communities to collectively reflect on the past, to discuss present situations, and to be energized to face the future. The launch of the exhibition thus not only marked a milestone in individual healing journeys, but also the resuscitation of spaces to talk in areas affected by the insurgency of the LRA and military response of the Ugandan army, the Uganda People’s Defence Forces. The exhibit echoes and affirms the fact that those with these stories tell them best.

Though digital projects are increasingly expected in large research projects, they hold a lot of potential for cooptation, appropriation, and erasure. As Nuwagira writes, it is “those with these stories” who “tell them best.” Long term partnership and collaborative strategizing are required in a project engaging storytellers and advocates who share their stories for justice and reparations.

Part of the appeal of digital projects is the way they enable multimedia and visual content and their potential accessibility. The Accessibility for Ontarians with Disabilities Act (AODA) is a law that calls on communities, all levels of government, businesses, and organizations to remove barriers to access and to focus on preventing barriers both now and in the future. Below are resources for your consideration. 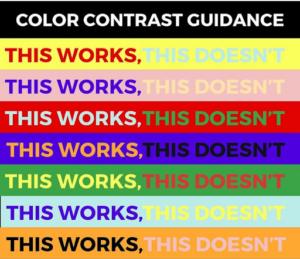 BCcampus has developed a useful resource on colour contrast in their Accessibility Toolkit-2nd Edition Pressbook, including links to contrast checkers: https://opentextbc.ca/accessibilitytoolkit/chapter/colour-contrast/

Disability Together aims to provide representation and awareness for all disabilities and accessible education. The organization developed a three-step guide to image descriptions, titled How to Write Image Descriptions from an Actual Blind Person.

As the above resources show, access needs differ and are specific to the communities and individuals with whom you work. As a result, avoid feeling overconfident about the accessibility of your project. Language like “fully accessible” is a red flag for many people with disabilities. See Mary of @invalid_art’s post for further explanation.

Editor Elizabeth d’Anjou of Eight-Step Editing recommends that texts read on devices and screens should aim to be clear, concise, and short (sentences should aim to be less than 20 words). As we learned while developing the “Ododo Wa Community Dialogues” Scalar project, academic work usually has low readability scores. In comparison, most text developed for public consumption is at an 8th grade reading level and the Flesch Reading ease score marks 60-70 as acceptable for web copy. Consider the specific needs of and literacies informing your project.

Follow the link to this free readability checker: https://readabilityformulas.com/free-readability-formula-tests.php